A new study shows that synchronized voltage rhythms may be key in coordinating our internal clock, offering new avenues for treatment of circadian disorders.

The inner working of the brain is one of the hottest areas of research right now. Although we know a great deal about this organ’s structure and functions, finding out the cellular mechanisms underlying the brain is a more difficult task. New research on the suprachiasmatic nucleus of the hypothalamus suggests that synchronized voltage rhythms are an integral part of this organ’s function. Could controlling this electrical activity be a future treatment for circadian disorders?

What Is the Suprachiasmatic Nucleus?

The suprachiasmatic nucleus is commonly known to be a driver of our innate circadian rhythm, synchronizing our internal rhythms with those of the outside world. Also called the SCN, this area of the hypothalamus is situated deep within the brain. Researchers have long known that the SCN receives messages about light from the retinas of our eyes and also coordinates signals from other systems. From there, it passes messages to the pineal gland, where melatonin is produced and stored. The pineal gland then releases melatonin in response to signals from the SCN, which in turn drives much of the cellular activity that relates to our circadian rhythm.

Although we understand a great deal about this complex system, there is much that is still unknown. In particular, we know very little about how environmental cues are coordinated into a coherent signal. However, a new chronobiology study sheds light on this matter, showing that synchronized voltage rhythms within the cells of the SCN may be an important part of the puzzle. 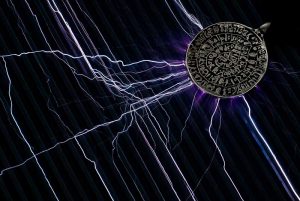 Our brain activity is partially controlled by electricity passed along neurons that function much like a wire in a machine. However, this electrical activity may be more complex than we previously believed. Like most neurons, the neurons of the SCN have voltage that is controlled by the build-up and release of ion gradients, in this case calcium. Researchers decided to measure the voltage in these neurons throughout the day using a special voltage sensor encoded into the DNA of mouse brains.

While each cell had its own oscillating rhythm, the additive effects of the cells were significant enough to form a pattern, driving our internal clocks. Even more surprising, cells in the SCN appeared to oscillate independent of calcium levels. Researchers believe that these cells have an alternate mechanism known as a synchronized voltage rhythm. That is, the cells communicate with other cells in the region to coordinate their changes in voltage and the resulting changes in SCN activity.

What Does This Mean for Treatment of Sleep Disorders?

While this may seem like impossibly complex science, there are real life applications that are more difficult to explain. First, electrical activity in the SCN is not entirely dependent on calcium channels. Treating sleep disorders with drugs addressing the activity of these calcium channels would likely be unsuccessful. The voltage rhythms appear to be completely independent of calcium fluctuation.

Second, clusters of neurons in the SCN appear to act as regional groups. Sleep disorders may be due to the activity of a very small number of neurons rather than the entire SCN. Local treatment may thus be more effective than treatments aimed at the entire body or even the entire brain. This is significant because the drugs prescribed for sleep disorders currently, which are often ineffective and have high rates of side effects, act on a variety of systems throughout the body.

Exactly how can we use this knowledge to more effectively treat sleep disorders in the real world? This question remains unanswered—for now. Understanding more about how our circadian rhythm is maintained on a cellular level offers hope for future treatments, but in the meantime, there remain few pharmaceutical options. Physicians and scientists continue to recommend lifestyle measures and supplements such as melatonin to keep our internal clocks on time.

The Profound Words of Walter Russell