Acupuncture is effective for pain relief. Researchers from the University of South Florida (Tampa) and the Fujian University of Traditional Chinese Medicine (Fuzhou) document that acupuncture alleviates pain, in part, by regulation of microglial cells. These are non-neural cells that comprise part of the central nervous system structure. Scientists already knew that microglial cells act as macrophages at sites of damaged central nervous system tissue. The research team (Lin et al.) from the University of South Florida (Department of Neurosurgery and Brain Repair, Department of Pharmaceutical Sciences) along with researchers from the Fujian University of Traditional Chinese Medicine (College of Acupuncture) made the key findings. 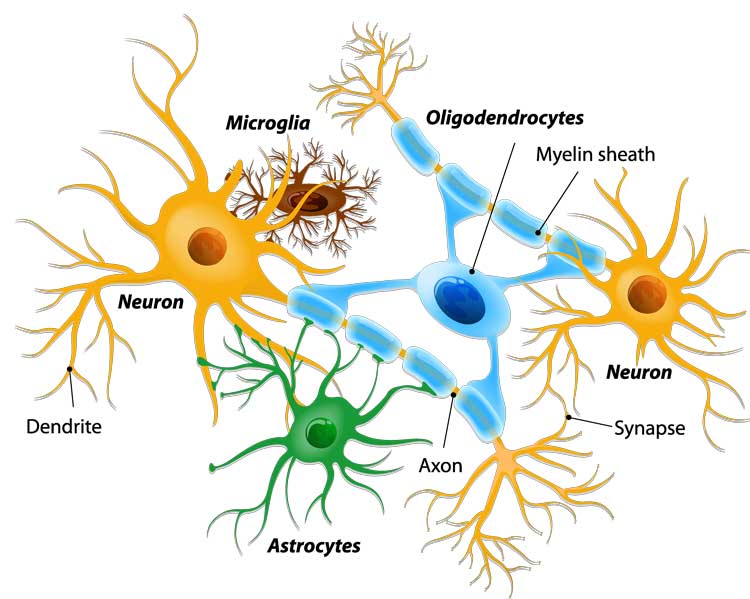 The researchers cite evidence demonstrating that acupuncture inhibits “microglial and astrocytic proliferation coupled with improved functional recovery after SCI [spinal cord injury].” They add, “acupuncture exerts a remarkable analgesic effect on SCI by also inhibiting production of microglial cells through attenuation of p38MAPK and ERK activation.” The researchers note that their investigation summarizes “clinical evidence demonstrating that acupuncture is capable of producing analgesia in neuropathic pain by suppressing microglial activation.” Funding for the groundbreaking research was provided by the US Department of Defense, University of South Florida Neurosurgery and Brain Repair, and the James and Esther King Biomedical Research Foundation.

The researchers note that scientists find both microglia and astrocytes involved in inflammation and pain. In addition, the researchers cite evidence demonstrating that acupuncture has an inhibitory effect on microglial activation. The research team provides background to this information. Microglia are the primary immune system cells in the central nervous system. They secrete proinflammatory and neurotoxic mediators when activated. The release of these mediators creates a positive feedback loop that leads to increased reactive oxygen species (ROS) induced microglial activation and subsequent inflammatory responses. Since acupuncture inhibits ROS, the researchers note that their findings “provide the possibility that acupuncture can be used effectively as a nonpharmacological intervention for spinal cord injury (SCI)-induced chronic neuropathic pain in patients.” They add that acupuncture has an important benefit to the brain. Electroacupuncture alleviates oxidative damage to the hippocampus by “preventing microglial activation.”

Lin et al. discussed other mechanisms shown to alleviate pain by modern research. They note that acupuncture stimulates the release of neurotransmitters, including opioids, in the central nervous system (2,3,4). The researchers add that this causes “potent analgesia, regulation of visceral functions, and immune modulation.” Lin et al. add that electroacupuncture enhances natural killer (NK) cell activity and beta-endorphin production via the hypothalamus.

The research team notes that numerous MRI (magnetic resonance imaging) studies find electroacupuncture effective for the activation of the hypothalamus. In one study cited by the team, researchers find “evidence suggesting that chronic pain patients respond to acupuncture differently than HC [healthy controls], through a coordinated limbic network including the hypothalamus and amygdala (Napadow et al.).”

Lin et al. note that numerous studies find acupuncture effective for the relief of pain; however, the mechanisms of action were unknown. For example, University of Manchester (UK) researchers (Abuaisha et al.) note, “acupuncture is a safe and effective therapy for the long-term management of painful diabetic neuropathy, although its mechanism of action remains speculative.” Lin et al. add that researchers at the Toronto Rehabilitation Institute in the Lyndhurst Centre (Toronto, Ontario, Canada) also found acupuncture clinically effective but did not map the mechanisms of effective action. The Toronto Rehabilitation Institute researchers concluded, “This retrospective study suggests that the Lyndhurst Center Central Neuropathic Pain Acupuncture Protocol may be an effective treatment option for patients with SCI who are experiencing below-level central neuropathic pain.”

Lin et al. provided another important example of clinical results with a call for greater inquiry into the mechanisms of effective action. Researchers from the University of Maryland (Baltimore) conclude, “Electroacupuncture blocks pain by activating a variety of bioactive chemicals through peripheral, spinal, and supraspinal mechanisms. These include opioids, which desensitize peripheral nociceptors and reduce proinflammatory cytokines peripherally and in the spinal cord, and serotonin and norepinephrine, which decrease spinal N-methyl-d-aspartate receptor subunit GluN1 phosphorylation.” Given the results of their research, the University of Maryland team (Zhang et al.) adds, “Clarification of acupuncture/electroacupuncture mechanisms will open a variety of opportunities to combine acupuncture/electroacupuncture with medications to manage and control pain, which makes it all the more important to continue such research.” The University of Maryland study was published in the The Journal of the American Society of Anesthesiologists.

Lin et al. note that mechanisms of action have been explored in a variety of research. For example, Xiao et al. conclude that “P2X3 receptors in the lPAG [lateral midbrain periaqueductal gray] are involved in the supraspinal antinociception effect of EA [electroacupuncture] treatment.” Lin et al. note that the details of the research by Xiao et al. reveal that PAG (midbrain periaqueductal gray) is an important brain structure active in electroacupuncture pain regulation.

Lin et al. provide insight into how acupuncture achieves its analgesic effects. The research demonstrates that acupuncture alleviates pain, in part, by inhibiting microglial activation. In addition, a microglial inhibitor drug was found to enhance the painkilling effects of acupuncture. Additional investigations into the effective mechanisms of acupuncture may help to improve clinical protocols resulting in improved analgesia for patients.

7. Zhang, Ruixin, Lixing Lao, Ke Ren, and Brian M. Berman. “Mechanisms of acupuncture–electroacupuncture on persistent pain.” The Journal of the American Society of Anesthesiologists 120, no. 2 (2014): 482-503.