In 1994 we began our work in the field of Sublte Energy Technologies with the development of an appliance called The B.E.L.S. or Bio-Electric Light Stimulator.   The B.E.LS. is a variation of Georges Lakhovsky’s Multiple Wave Oscillator.  It employs the use of an Air Core Resonant Transformer commonly called a “Tesla Coil” named after Nikola Tesla the inventor of alternating current, radar, remote control, the radio, wireless electricity. He is credited for nearly 300 patents.

Tesla’s research into the therapeutic benefits of this type of technology opened the door for people like Georges Lakhovsky to develop the M.W.O. or Multiple Wave Oscillator.  With Tesla’s help, Lakhovksy’s MWO worked to perfection.  Descriptions of his successful experiments were outlined in his book The Secret of Life  circa 1935.

Lakhovsky surmised that the more frequencies that the Oscillator could produce the better chance it would have to resonate with the wide range of frequencies that make up living organisms.  For this reason Lakhovsky started using argon gas in the concentric rings that made up the antenna of his later versions of the Multiple Wave Oscillator.  This was done to create a greater harmonic richness.  The use of noble gases by Royal Rife and Antoine Priore also played into the B.E.L.S. research and development.

The Montana group that developed the original B.E.L.S.. consisted of four developers and one financier.   The individuals came from a wide range of backgrounds.  The visionary had a degree in mathematics but by himself lacked the resources to facilitate the project.  For that reason other people were recruited to accomplish certain tasks.  The electronic design work was fulfilled by an electronics engineer with over 20 years of experience.  A construction professional worked on assembly techniques as well as the carousel design work.   A medical intuitive rounded out the group.   His task was to evaluate the B.E.L.S. from an energetic/intuitive perspective.    He also coined the name “B.E.LS.”

An egalitarian group was formed to create an atmosphere of unity and oneness.  It was agreed upon with a handshake.  This was deemed to have a greater value than any signed documents because it was a test of ones integrity.   This was an essential component of the technology.  It was determined that the developer’s “vibration” would have  an effect on how well the devices functioned.   Basically, in order for the energetic component of this technology to work properly it required those building it to be in integrity.  The goal was to create a technology that could create a positive shift in consciousness.   By individuals becoming conscious, wellness would soon follow.  In essence, any perceived health benefit that this technology facilitates is a side effect of the developers intention.

The first demo units used 3 vacuum tubes approximately 18″ long.  One tube used neon gas and the other two used a mixture of neon and argon gas.   While this unit had some merit, it was determined that there were holes in the energetic fabric that needed to be filled.  Seeing how well most of the noble gases resonated with living organisms, the group investigated using a number of noble gases to fulfill their needs.  The easiest and most cost effective way to accomplish this was by using spectrum analysis tubes.  This type of vacuum tube is widely used in the scientific community to study wave forms.  Systematically, a cluster of 12 tubes was decided upon.  There was also a specific order the tubes were arranged in  that best resonated with living organisms.  It was noted that when the gas tubes were moved around it would change the energetic output of the unit.   The interaction of plasma fields or magnetohydrodynamics is how the specific pattern was determined.  At this point it was determined that the device had a very positive effect on mental, emotional, physical, and spiritual bodies.   It was raising the vibratory rate of these various systems as well as the chakra system.  Under the influence of the B.E.L.S. all of the chakras would light up.  After turning off the unit the chakras would continue to hold the charge for different lengths of time depending on the individual.

This was an exciting  and magical time for the group.  The units were nothing short of amazing.  At this point the developers felt that the B.E.L.S.. was ready for outside evaluation.  Units were sold at cost or loaned to individuals with medical backgrounds as well as other medical intuitives.   The B.E.L.S was first displayed publicly at the Universal Light Expo in Columbus, Ohio in October 1995.  The demonstrations there brought long lines of people who were thoroughly amazed at the positive sensation that the unit generated.  The next show was the Whole Life Expo in Las Vegas, Nevada in November of 1995.  Again the response of the crowds of people was overwhelming.  A number of well known individuals  attended the expo  and gave a thumbs up to the technology.   One of them, the late Bob Beck, a pioneer in electro-medical devices, said it was the best thing he had seen in 30 years.

The First Working Production Model of the BELS circa 1995

After the great success that the B.E.L.S. had at the Expos there was a division in the group.  There were several issues that came up.  Three members of the group felt that the technology needed more refinement before it was ready for the public while the other two individuals were desiring to fast track it to the masses via a venture capitalist.

One of the disagreements was over two different schools of thought.  The three members who felt refinement was essential had a “less is more” approach to the technology.   Their concern was that they intuitively felt that the stronger energy fields could possibly overheat cells.  The other two members embraced the theory  “if a little is good, more is better”.   To this day the debate as to which theory is correct continues. No side by side study has ever been conducted to prove either theory.   Another issue dealt with working with a venture capitalist.  Again the same three members were concerned with the integrity of this individual.  The other two felt very confident that it was a “slam dunk” so to speak.  The final issue concerned trying to get a patent on the technology.  The same three members were in disagreement.   They felt that it was not patentable due to the fact that there was nothing new to be patented.   The Tesla coil, vacuum tubes, spark gap assembly etc. had already been patented at least 100 years prior and is considered “public domain” technology.  They also felt that even if a patent could be achieved, it may not be the best course of action.  One concern was that a patent of this type if achieved, could be easily challenged because of prior patenting.  Secondly, they had reservations because of the fact that the technology was freely given from the Source.  Putting restrictions on the technology could prevent it from fulfilling its destiny to help humanity on a much larger scale.

Since no compromise could be found,  the group was disbanded.   The two people who wanted to move forward with the BELS as it was forged ahead and received patents.   Unfortunately, the venture capitalist, who is listed as  “inventor” on the BELS patents, decided not to move forward with the B.E.L.S. and went on to embrace another technology.   This left the two individuals tied up in legal stuff for quite a few years.   Today they make a very fine unit that expresses their theory that stronger energy fields are the only way to go.  The other 3 members, the electronics engineer, construction professional, and the medical intuitive followed their intuition to develop a much more refined and Bio-available unit they called S.E.A.D. or Subtle Energy Activation Device.

The S.E.A.D. technology was a completely new design from top to bottom.  Over time the group of 3 added another very creative individual who played an integral role in the new design.   Together they were able to discover new ways to efficiently transmit this powerful energy with a considerably smaller unit.   The only thing that resembles the original B.E.L.S. is the Carousel, which now uses a tall center tube  which is for “Qi Activation”.  The S.E.A.D. can now sit on a coffee table and is totally portable weighing nearly 50 pounds less than the original B.E.L.S.   The S.E.A.D. emits a cleaner quieter energy field that is considerably more Bio-available to the various systems of living organisms. 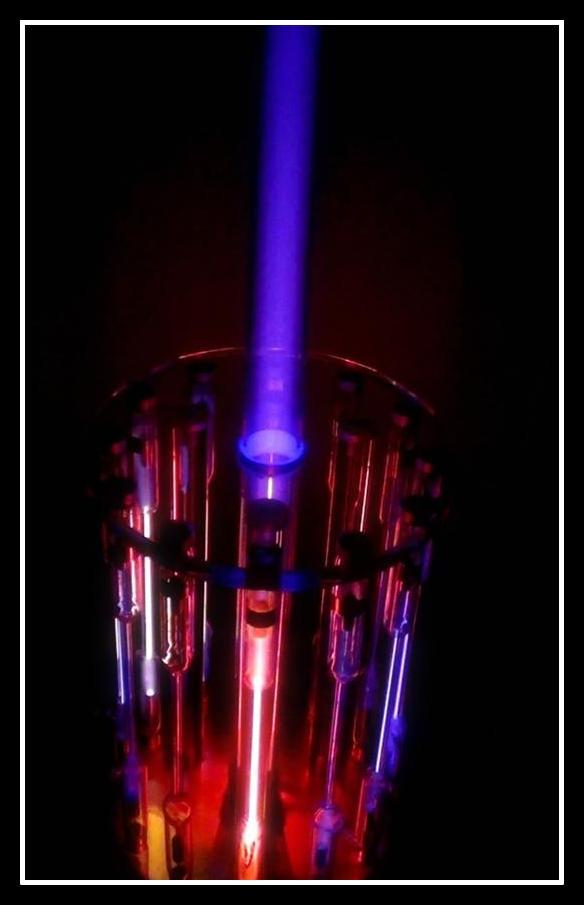 In 2000 the S.E.A.D. DC unit was unveiled.   Generating a deep penetrating energy.   The DC speaks the language that the body understands.   For this reason it is easily assimilated.   As the research progressed the usage of the AC and DC in concert was developed.   Placing the AC at the Head of the user and the DC at the feet created an amazing balanced effect.   When the two energy fields of the AC and DC mix there is a 3rd energy field generated.   This dynamic energy is greater than the sum total of either the AC or DC units by themselves.  Multidimensional Technologies pioneered the use of AC and DC fields in unison in this manner.

Multidimensional Technologies continues to create and evolve the technologies that they have been given guardianship of.   In 2013 the Ex-S.E.A.D. or Extremely Subtle Energy Activation Device was developed.   Available in both AC and DC it offers an extremely subtle harmonic rich energy field that is very soft and penetrating at half the cost of the original S.E.A.D.

No medical claims  what-so-ever are made or intended.  The products offered here are for research only and must be used in accordance with all local and national guidelines for these types of technologies.  If you are in poor health seek professional medical help immediately.  DO NOT attempt self diagnosis and treatment.