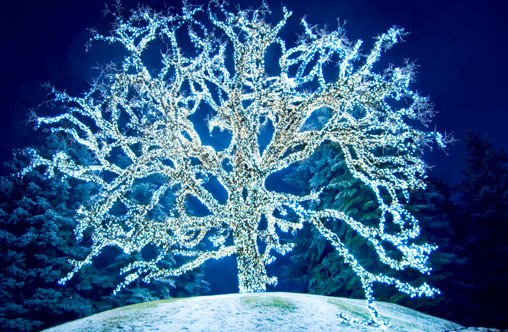 Electricity is essential to plant growth and disease resistance. Through the use of electrical currents at specific pulse rates, chemical fertilizers may be fast becoming a thing of the past.

“Apparently the first man to explore the potential was one Dr Maimbray (or Mainbray or Von Maimbray — sources differ) of Edinburgh who in 1746 undertook to electrify two myrtle bushes. He used a primitive electrostatic generator to produce the power. After being zapped for the entire month of October, according to Maimbray, the shrubs put out new branches and blossomed. A paper on the effects of electricity on vegetables read to the Royal Society in London the following year resulted in a wave of enthusiastic experiments.”

“That may not, however, be the last word on the subject. In 2006 an English botanist named Andrew Goldsworthy came up with an ingenious explanation of why plants reacted positively to electrical current. It was, it seems, a hereditary response to the atmospheric electricity produced by an approaching thunderstorm. Being zapped caused the plants to anticipate a good drink of water and prepared them for making use of it — and growing faster.”
http://www.telegraph.co.uk/gardening/8981052/The-bright-sparks-of-electro-horticulture.html

“The fabric of all things in physical form on this planet is based on elemental atomic structure. Biological entities are composed of interconnected cellular structures forming tissues, organs and biochemical networks. At the core are atomic elements, each of which is associated with some level of electrical charge. These charges are the basis for the forces of electrochemical attraction and repulsion that occur within the cellular structures within all living things.The interactions between these components are vast, making use of many forms of information and electro-biological mechanisms including electrochemistry, biophysics, genetics and perhaps other forms of study that are beyond our current understanding, such as the studies of subtle energies, bioenergetics and quantum physics, which are still in their infancy.”

“For example, not only are large molecules such as proteins usually electrically charged, but did you know that DNA itself is also highly charged? It is these electrostatic forces that hold the molecule together and give it structure and strength.”
http://electricfertilizer.com/2014/05/nature-electricity-part-1-thunderstorms-natures-crop-boosting-technology/

Electro-horticulture is an amazing study of the electrical properties of plants. Through these studies, revelations as to the effectiveness of electricity in plant production are better understood.
This slideshow explain the process and benefits.